This work is prompted by the desire to fathom corruption and underdevelopment in Nigerian public service. (A study of Anambra state).as a modest contribution of the federal government declared to eradicate corruption in our society. furthermore, in data collection,  primary and secondary sources were used by the researcher . The primary source were got through questionnaire and interviews with the Anambra state Public servants, while secondary data were collected from books, journals, newspaper and other written materials from the analysis and discussions, the following findings were made, corruption is the major issue and it has its causes, consequences and solutions one of the major, corruption causes under development, corruption equally causes employment, the following steps should be taken to alleviate the problem associated to corruption. 1. There should be management practice, which will help to eradicate bribery and corruption. High standard of moral behaviours should be prescribed in the Nigeria constitution for public officers should be vigorously enforced (2) The management should create more incentives for motivating both employees and employers. (3,)Promotion and compensation of employee should be based on merit through organized job evaluation procedure, which can be understand by the employees if all these could be taken into account, it will help in the growth and development of the economy. 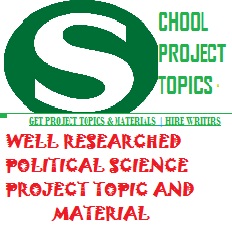 1.1 Background to the study

1.2 Statement Of The Problems

1.4 Purpose of the study

1.5 Significance Of The Study

2.1.1 Conceptual frame work on the concept of corruption and local government.

2.1.2 Forms and nature of corruption in Nigerian public service

2.1.3 The historical development of corruption in Nigeria

2.1.4 Problems and effects of corruption on development.

TABLE 3.1: Table showing the departmental distribution of the respondent

TABLE 4.1: Table showing the relationship between corruption and underdevelopment

TABLE 4.2: Table showing the relationship between corruption and unemployment

TABLE 4.4: Table showing the impact of eradication of corruption and Development

1.1 Background to the study

Nigeria is rich in natural and human resources, with a population of over 150 million people; the most populous country in Africa. At the time of her political independence, on 1st October 1960, Nigeria excelled in production of agricultural produce such as groundnut, palm oil, cocoa, cotton, beans, timber and hides and skins.

Then, during the oil boom period of the seventies Nigeria made headlines with her oil wealth, as a country richly endowed with oil and natural gas resources capable of financing a number of important projects to meet basic consumption and development needs (Salisu, 200:2). With per capital income of around $1,100 during the late 1970’s Nigeria was regarded as the fastest growing country in Sub- Sahara Africa (Salisu, Ibid). Yet it remains predominantly underdeveloped due to the scourge of corruption that has corroded it.

Corruption denies the ordinary citizen the basic means of livelihood, it worsen unemployment and erodes our image as a nation and as individual (Danjuma Goje 2010). It has undermined Nigeria’s economic growth and development potential, with a per capital income of $340, Nigeria now ranks amongst the least developed countries in the World Bank League table (Salusi, op.cit). Nigeria’s higher education system once regarded as the best in Sub-Sahara Africa is in deep crisis.

Health services are woefully inadequate, graduate unemployment is rising and so too is crime rate (Salisu, Ibid).This culture of corruption which is rampant at national level constitutes a threatening force to development at grassroots level.

It has been a significant factor leading to the general failure of local government as well as an excuse for suspending representative institution (Humes and Ola, N.D: 104). Corrupt practices have been deleterious not only because they divert funds from public purposes to private purses but also they undermine the vitality of local government.

Anambra is the eight most populated states in the Federal Republic of Nigeria and the second most densely populated state in Nigeria after Lagos State. Anarnbra possesses a history that stretches back to the 9th century AD, as revealed archaeological excavations at Igbo-Ukwu and Ezra; Great works of art in iron, bronze, copper, and pottery works belonging to the ancient Kingdom of Nri, Led a sophisticated divine Kingship administrative system which held sway area of Anambra from c. 948 AD to 1911. The Historical background of Anambra state prompt the researcher to chose it as a study area.

The significant level of Corruption in Most of the Local government in state viz Idemili North, Nnewi North and South, Ihiala, Anambra East Aguata leads to the former governor Chris Ngige to suspended six heads of service in the state local government system for alleged misappropriation of council funds. About eight local government treasurers and the Auditor-General Local Government were suspended for alleged misappropriation of councils’ funds. These suspensions came amidst complaint of non-payment of July salary and arrears from the previous government by the workers.

Get This Complete Material Here

AN INVESTIGATION INTO THE PROBLEMS OF LEADERSHIP IN TERTIARY INSTITUTIONS A STUDY OF FEDERAL POLYTECHNIC, OKO.