THIS STUDY IS ON A STRONG IMPRESSION OF EFFECTIVE MANAGEMENT OF RESOURCES IN SOLVING UNEMPLOYMENT PROBLEM IN NIGERIA. THIS RESEARCHER WANTS TO KNOW THE IMPACT OF EFFECTIVE MANAGEMENT OF RESOURCES IN IGBO-EZE SOUTH LOCAL GOVERNMENT AREA, HOW THEY HAVE CARRIED ITS OPERATIONS TO BRING THIS PHENOMENON TO ITS BEST MINIMUM. IN ORDER TO ACHIEVE THIS AN EMPIRICAL SURVEY AND LIBRARY RESEARCH WERE CARRIED OUT. THE SOURCE OF DATA USED INCLUDE BOTH PRIMARY SOURCE OF DATA AND SECONDARY DATA. THE PRIMARY SOURCE OF DATA ARE THE ADMINISTRATION OF QUESTIONNAIRES AND ORAL INTERVIEWS WHILE THE SECONDARY SOURCE INCLUDES STATISTICAL TOOLS USED IN TESTING HYPOTHESIS. THE RESEARCH REVEALS THAT THE LOCAL GOVERNMENT HAS NOT PUT THE NECESSARY MACHINERY IN PLACE TO TACKLE THE MANAGERIAL SKILL OPERATION IN THE AREA. THIS FACTOR HAS BEEN A FORCE MILITATING AGAINST SOLVING UNEMPLOYMENT PROBLEM. HOWEVER, IT WAS DISCOVERED ALSO THAT THE LOCAL GOVERNMENT UNDER STUDY ENGAGES IN VARIOUS ACTIVITIES AND SCHEMES INCLUDING PROVISION OF PIPE BORNE WATER, RURAL ELECTRIFICATION PROJECTS TO ATTRACT INVESTORS TO HARNESS THE AVAILABLE NATURAL RESOURCES TO CREATE EMPLOYMENT FOR THE PEOPLE BESIDES, LACK OF INFRASTRUCTURE HAS EQUALLY CONTRIBUTED TO NON IMPROVEMENT OF UNEMPLOYMENT SITUATION.

1.7     Response from Igbo-Eze South workers showing what they think is mot responsible for the current state of development in Igbo-Eze South

1.8     Responses from Igbo-Eze South people and workers showing how they see level of local government performance with respect to development

1.11 Response from the local government staff on what type of project they always embark on

2.1 THE CONCEPTS OF MANAGEMENT

2.4 UNEMPLOYMENT- A SETBACK TO A NATION ECONOMIC DEVELOPMENT

2.5 EFFECTIVE MANAGEMENT OF RESOURCES AS A VERITABLE TOOL FOR SOLVING UNEMPLOYMENT

2.6 THE IMPACT OF EFFECTIVE MANAGEMENT OF RESOURCE IN OJI0RIVER LOCAL GOVERNMENT 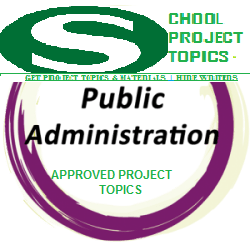 5.3 IMPLICATION (S) OF THE RESEARCH FINDINGS

5.6 LIMITATION OF THE STUDY

Unemployment can be defined as the situation where by some people leaving in a specific given area, who are capable and willing to work but are not gainfully employed. For an example, in developing countries, like Nigeria, unemployment is a serious social evil that have seriously eating up Nigeria economy and have affects growth and development.

The production sector of the economy is one of the most important in terms of providing access to basic societal needs such as employment, income and services. Management is the act of controlling or running a business or an organization with the aim of making profit by an individual, firm or government. The implementation of effective management of available resources can be a remedy to the problem of unemployment in Igbo-Eze South Local Government Area in Enugu State as a case study.

Evidently, most of the developing Asian economic have sincerely realized the need to turn some attention to the development of resources which will generate employment at Local Level (Igbo-Eze South Local Government Area in Enugu) as well as provide cheaper goods at affordable prices to the vast majority of rural areas. Federal government in it 1997 national budget laid more emphasis on the establishment of cottage industries as a measure of curtailing the influx of people from the rural to the urban centres in search of what they term better job (employment). This led to the establishment of the family economic advancement (FAP) whose sole aim is to exploit the potential of the rural communities so as to facilitaties the setting up of productive cottage industries that will use local labour, locally available raw materials and fabricated equipment in the rural areas. With the presence of enormous raw materials exist in almost all parts of the country (i.e. Igbo-Eze South Local Government Area in Enugu State) and therefore, effective resource management should be carried out and sited areas where there is labour availability in the aim of salvaging the problem of unemployment in the given area. The family economic advancement programs which encompasses cottage industries and other relevant production is designed, among other things to promotes local designed and fabrication of plant and machinery and equipment by engaging other youths of Igbo-Eze South L.G.A. as a way of reducing unemployment. Provide facility for the procurement for machinery/equipment for Nigerians to set up and run cottage and effective managed industries, utilize all available local resources for the benefit of all Nigerians through improved production, preservation and provide an enabling environment for private sector and UN agencies participation in the program.

It is expected that this will initial the much needed technological development and effective management of resources in the given area as a case study.

1.1 BACKGROUND OF THE STUDY

Formally, she was under Igbo-Eze North Local Government Area, but because people from the community were not receiving government attention, they were denied social amenities like electricity, pipe born water, health facilities etc. the community started to agitate for establishment of local government in their community since they have attained constitutional requirement, then after much deliberation, she was established in 1991.

Igbo-Eze South Local Government Area was blessed by God with natural endowments which include: the rain forest trees such as palm trees, Iroko trees, Mango trees and other economic trees which occupied the lower part of her headquarter.

This Local Government has affected the communities positively through the achievement of the followings.

1.2 STATEMENT OF THE PROBLEM

The problem of how unemployment can be solved by the effective management of resources is the core of the study, the researcher intend to find out what effect, effectively managed resources will have in the reduction of unemployment rate in Igbo-Eze South Local Government. The population on which the study will be based the researcher intend to look at the operations of the establishment within the area and hope effective the manager of these business/ establishment will contribute in the study area.

The purpose of the study is to elicit the jobs, which with the changing economic trend and high labour cost becomes very expensive for the employer who will proffer to improve the skill of his staff or computerize his company thereby cutting labour cost and maximizing his profit. When this becomes unemployment with little or no hope of getting employment because of the changing trends; modernization and technological development of labour management based on this short fall in employment becomes a problem. One way to improve unemployment is through the effective management of resources in an establishment.

Effective management of resources in an establishment in Igbo-Eze South encourages specialization and division of labour which means that more people will be needed to perform the certain function and more and more will also be encouraged to exhibit dexterity in certain skill so as to perform the certain task more effectively at a higher rate of output so as to meet the demand of their customers by this specialization is encouraged as opposed to the use of computers which needs few people to feel information into them.

Effective management of source resources in Igbo-Eze South will reduce unemployment and the dependence on government corporate bodies as the last hope of job seekers for engaging in income generating ventures. As a matter of fact, this will put smile on use of effective management of source resources as a means of reducing unemployment problem within Igbo-Eze South Local Government.

THE IMPACT OF COMPUTERS TECHNOLOGY ON SECRETARIAL ADMINISTRATION IN THE BANKING SECTOR (A CASE STUDY OF JAMB, OWERRI)